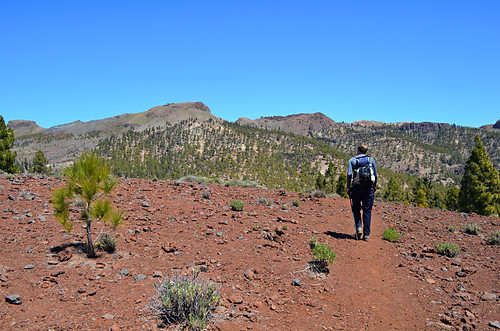 Weather Forecast for Tenerife 25 to 29 March
The week started spectacularly with snow in Teide National Park, and people flocking to the crater to build snowmen, resulting in closed roads. At lower levels there was heavy rain in many parts of the island and the areas that escaped the rain seemed to get quite strong winds instead. But even on the worst days, we enjoyed walking in sunshine in the southern hills and in Teide National Park. Midweek wasn’t quite as sunny as predicted but the south perked up by the weekend, whereas low, misty cloud kept parts of the north under a blanket.

Weather Forecast for Tenerife 30 March to 5 April
It’s looking good for the week between Palm Sunday and Easter weekend with mainly sunny days and warm weather across Tenerife. The week will start with high temperatures, especially in the south west where it could be a few degrees warmer than everywhere else. Some cloud could roll in over the weekend bringing lower temperatures and a slight chance of rain in parts, but it should still be mainly sunny, especially at the coast.

Weather in South Tenerife – A sunny, dry week with temperatures staying around 23/25C for most of the week before there’s a slight drop at the weekend to 20/22C.

Weather in North Tenerife –  A sunny week with temperatures of around 21/23C until Sunday when there will be a dip to 17C and a 50% chance of rain.

Weather in South West Tenerife – It’s a very hot start to the week in the south west where temps could touch 30C today (Monday). After that they’ll stay around 25/27C before dipping like everywhere else on Sunday.

Weather in the Mount Teide Crater –  There could be some cloud every day over the coming week in the crater. It will be the same on Mount Teide, although any cloud on the peak could disappear by the weekend. Temperatures will be 8C to 14C at crater level and and 1C to 5C on the summit.

The Tenerife Weather This Time in 2014
We were walking across Fuerteventura this time last year where we experienced alert level winds, rain and lots of sunshine, although it wasn’t particularly warm. By all accounts Tenerife wasn’t much better. We returned to Tenerife at the end of the week when it was warm and sunny and we commented “Now it really feels as though spring has arrived…”

Pic: Even with ‘all seasons in one day’ weather there were plenty of sunny spells.