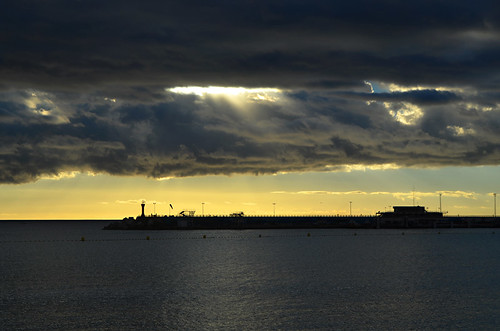 Weather Forecast for Tenerife 27 October to 2 November
The weather on Tenerife more or less panned out as predicted. It was still quite hot, very hot at times. However, there was a lot of cloud about and it did rain, heavily in the north and west on Sunday. We were in the south of Tenerife for three days and experienced weather that matched the forecast – sun, cloud and rain (on two out of three days we were caught in rain). From Montaña Guaza on Wednesday we could see thick, bruised cloud cloaking the surrounding hillsides and throwing Los Cristianos into shade, although Las Américas sticking out into the sea remained mainly in sunshine. Thursday and Friday began beautifully but again thick cloud rolled in before the morning was over. There are reports that Mount Teide is once again snow covered, but it’s still hiding at the moment.

Weather Forecast for Tenerife from 3 to 9 November
A quite typical November week with this spell of mixed weather continuing for the moment. The north should see most cloud and rain, especially during the second half of the week, but the pattern is more or less the same everywhere – a mainly sunny start and an unsettled second half to the week with a mix of cloud, showers and sunshine most places. The weekend is looking particularly cloudy at the moment but there are signs that things might start to brighten up again from Sunday.

Weather in South Tenerife – The week will start warm and sunny but from Wednesday it will be cloudy with a likelihood of some rain (50 to 80%). Saying that, the sun should also shine every day at some point. Temperatures will start the week around 26/27C but the cloud will bring a slight drop to 21/22C for the second half of the week.

Weather in North Tenerife – It could be a rainy week in the north of Tenerife with only Tuesday and Wednesday afternoon looking like there will be decent sunny spells. Rain looks very likely most days (35-100%). Again the sun should shine at some point every day except for the weekend when it’s looking particularly glum. Temperatures start the week at 24C before dropping to 20C for the second half of the week.

Weather in East Tenerife –  Much the same as the north except Wednesday is also looking like mainly a grey day in the east.

Weather in South West Tenerife – A sunny Monday and Tuesday turns cloudy with sunny spells on Wednesday and Thursday before the cloud completely takes over for Friday and the weekend. Like everywhere else it will be a warm start to the week (27C) before temps drop to 20/22C from Wednesday when there is also a 45-80% possibility of rain.

Weather in the Mount Teide Crater – Although there should be clear skies on Monday and Tuesday there could be rainfall at night in Teide National Park. Wednesday and Thursday should be sunny whilst the rest of the week could see quite a bit of cloud and even rain mixed in with the sunshine. Temperatures in the crater will range from 10 to 13C and 1 to 5C on the summit.