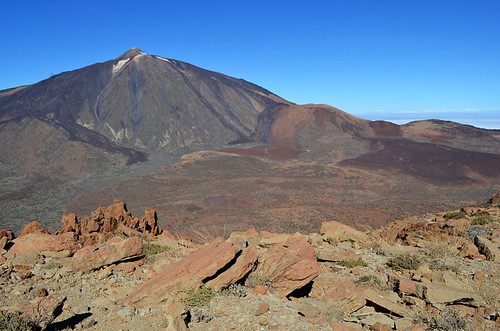 Weather Forecast for Tenerife 19 to 25 January
Again, the weather pattern of coolish temperatures (for Tenerife), sunny and cloudy periods, and light rainfall continued as predicted. There were warm and sunny spells as well and we enjoyed quite perfect conditions walking in Teide National Park, where the cooler January temperatures made ascents a little bit easier whilst the sun kept our bodies warm even though shade temperatures were parky.

Weather Forecast for Tenerife 26 January to 1 February
More of the same. The pattern for the coming week follows recent weeks with sunshine and warmer temperatures at the start of the week and cloud rolling in during the second half, although there will still be long sunny spells most places. The outlook for the weekend doesn’t look great, with cloudy skies and rain falling most places at some point during the day. Saying that, even then there should be sunny spells.

Weather in South Tenerife – Exactly the same words as last week – the week will start warm and sunny whilst the second half of the week will see cooler temperatures, cloud and possibly showers (a 5-80% chance of rain) with the weekend looking quite grey. Temperatures will start the week at 21/22C but will start to drop from Tuesday and will stick at around 15/16C in the shade for the rest of the week apart for Saturday when although it could be cloudy, temperatures will rise by a couple of degrees.

Weather in North Tenerife –  Much the same pattern as the south except a couple of degrees cooler at the start of the week (19C) but very slightly warmer in the second half, staying at 15/17C in the shade. Again, the weekend doesn’t look great with the chance of showers from Wednesday and rain almost guaranteed over the weekend (95 to 100% from Friday to Sunday). The good news is that the sun should shine at some point every day.

Weather in East Tenerife –  Apart from Tuesday, which should be sunny, it looks like a cloudy week in the capital, Santa Cruz. The sun might also shine through today, and Thursday afternoon. But the rest of the time it could be cloudy with showers on Wednesday and Thursday which turn heavier for the weekend. Temperatures match those in the north.

Weather in South West Tenerife – The same as the south but with more sunshine and a slightly less chance of rain over the weekend (40-75%).

Weather in the Mount Teide Crater –  It’s a case of getting high for the sunshine on Tenerife this week. It looks like it will be a beautiful week in Teide National Park. Even the wind is staying calm. Temperatures in the crater will range from 6 to 7C and between -5 and 0C on the summit of Mount Teide.

Pic: Whatever it was doing on the coast, it was stunning in Teide National Park.