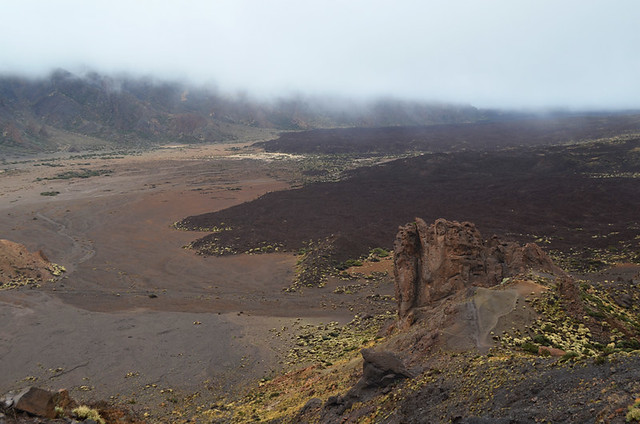 Weather Forecast for Tenerife 17 to 23 November
It turned out to be a horrible week in some parts of Tenerife with yellow and orange weather alerts for rain, thunderstorms and wild seas lasting from Tuesday until Sunday. No areas completely escaped cloud, cooler temperatures and some rain, but the north took the brunt of the rainfall with regular spells of monsoon like downpours most days. There were sunny spells but overall it was miserable. The south and south west experienced unsettled weather as well but levels of rainfall varied with the south east apparently faring better than the south west. We walked in sunshine above the south coast on Tuesday, but watched the clouds roll in below us as an orange weather alert was raised. By Wednesday morning it was miserable and a drive home through Teide National Park before the snow came revealed a damp, icy cold, misty world. The south ended the week in sunshine whilst on the north coast it rained most of the day. The upside of the bad weather is that we now have a beautiful white mountain in the centre of the island

Weather Forecast for Tenerife from 24 to 30 November
The week starts promising enough with warm temperatures and plenty of sunshine. Unfortunately that will start to change from Wednesday afternoon as another poor weather front rolls in bringing cloud, rain, wind and snow on El Teide. Temperatures will also experience a dip before starting to rise for the weekend. It doesn’t look as though anywhere will escape the bad weather but it does looks as though the sun should make an appearance most days despite the rainy forecast. Friday looks like it will be the worst day.
Unfortunately, and not for the first time, the glum weather coincides with the San Andrés celebrations planned for next weekend.

Weather in South Tenerife – The first half of the week should be sunny and warm, but some cloud will roll in from Wednesday afternoon bringing a chance of rain for the rest of the week (55-100%). Friday looks particularly grey, wet and windy with the rest of the weekend not being much better, although the sun should shine at some point on Saturday and Sunday. Temperatures start the week at 24C but drop gradually, bottoming out at 18C on Saturday before they start to climb again.

Weather in North Tenerife – Similar to the south but with a bit more cloud. A sunny start to the week and a change midweek to cloud and sun with Friday and Saturday looking wet and cloudy. Temperatures start the week at 22C drop to 16C on Saturday and climb again from Sunday.

Weather in East Tenerife –  The weather pattern is similar to the south with temperatures matching those of the north – sunny and warm start ending in a grey and cooler than usual for this time of year weekend.

Weather in South West Tenerife – The forecast for south west is almost exactly the same as that of the north, and follows the same pattern as everywhere else. For a change, it might be a degree cooler than the south.

Weather in the Mount Teide Crater – Much the same in Teide National Park where there will be a sunny start to the week before cloud rolls in from Wednesday night. The sun will make an appearance at some point each day after that it will also rain in the crater and snow on Teide’s slopes for the rest of th4e week. It will also be extremely windy in the crater on Thursday night and Friday with gusts reaching 60kph whilst on the summit the winds might reach 80kph. The strong winds and snow will probably put the cable car out of action for most of the week. Temperatures in the crater will range from 6 to 12C, on the summit of Mount Teide between 3 and -3C.