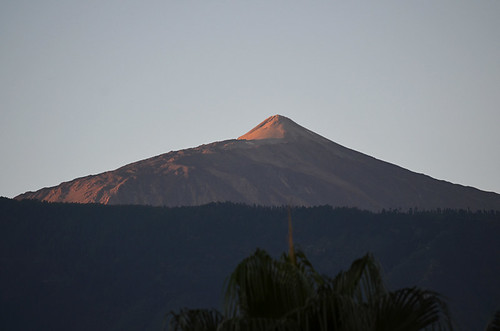 Weather Forecast for 14 to 20 December
Mostly it was a cracker of a week with blue skies and warm sunshine in the north of Tenerife and slight calima in the south. The week ended with a yellow alert for rough seas and rain in the north. In the south the alert was just for rain. It turned out to be brighter than expected with a quite short shower in the north during Sunday night although heavy skies in the hills to the west suggested that some places were experiencing rain. A visiting friend left a rainy La Gomera to arrive on a dry Tenerife on Sunday morning.

Weather Forecast for Tenerife 21 to 27 December
Although the forecast is for rain everywhere at some point on Monday, Christmas week should be warm and sunny across Tenerife with Xmas Eve and Xmas Day looking typically sunny. There’s a slight chance of showers by the weekend (25/35C) but overall it’s looking great.

Weather in South Tenerife –  After a grey, and possibly wet at times, Monday (in theory) the clouds should head somewhere else for Christmas leaving a mainly warm and sunny week. Temperatures start the week at around 23C rising to 26C on Tuesday and then settling at 19/21C in the shade for the rest of the week.

Weather in North Tenerife –  The north of Tenerife could start the week slightly sunnier than the south but after Monday the pattern is more or less the same, sunshine throughout the week. Temperatures start the week at around 20/22C before settling at 18/19C in the shade from Wednesday.

Weather in East Tenerife –  There’s more chance of cloud in the east but it should still be mainly sunny on most days.

Weather in South West Tenerife –  It’s much the same pattern as everywhere else; after a Monday where there could be sun, cloud and showers it should be a mainly sunny week. Temperatures start the week at around 21C, rise to 25C on Tuesday and then fall to 20/21C in the shade for the rest of the week.

The Tenerife Weather This Time in 2014
So what happened this time last year? It was a yellow alert for calima in the south and warm and sunny in the north.