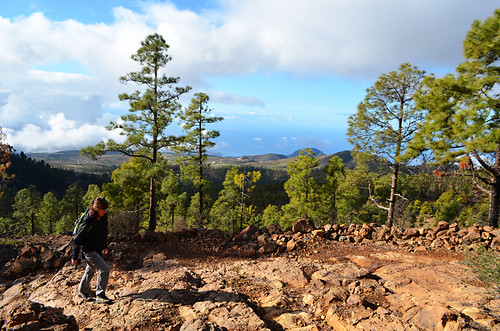 Weather Forecast for Tenerife 9 January to 15 February
Was there a feeling of a change in the seasons last week? Possibly. We spent the week walking in the south of Tenerife. When we left Puerto de la Cruz and the Orotava Valley on Monday they were bathed in sunshine and when we returned late on Friday they were also in sunshine. The weather we experienced in between was mixed. The week in the south started cool, grey and with rainy periods. But there were clear signs of an improvement by midweek when days at least started sunny although clouds tended to roll in as the day progressed (get your sunbathing done in the morning). It still might not have been great sunbathing weather all week but it was mainly good conditions for walking. The signs of change are beginning to show – the wild flowers on parts of southern slopes are looking lovely. Our jasmine hedge is beginning to flower (two years ago it was in full bloom by this time) and it was feeling positively balmy by early evening yesterday. What’s more, carnival got off to a good start with no extreme weather to spoil the party… yet.

Weather Forecast for Tenerife 16 to 22 February
But it is carnival in the north and it’s rare the weather doesn’t try to rain on the carnival parade at some point so it’s no real surprise the forecast this week includes not only rain but a weather alert for high winds (gusts up to 70kph Tuesday and Wednesday) and wild seas (Tuesday only). The pattern for the week looks boringly familiar – warm start to the week with temperatures dropping and an increased chance of rain as the week progresses. However, as the forecast shows sunshine as well there’s a chance most of the rain will be a) at higher levels and b) during early morning or overnight (not so good for the all night street parties). Recent weeks has showed that whilst it’s been cool, the predicted drop in temperatures at weekends hasn’t really materialised.

Weather in South Tenerife – There’s still a pattern of a mix of sun and cloud throughout the week with a possibility of rain (5-80%). It looks like the weekend could be dullest, wettest and coolest. Temperatures start the week at 22C and dropping to 15/16C for most of the rest of the week. There is also a yellow alert for high seas on Tuesday and strong winds on Tuesday and Wednesday.

Weather in North Tenerife –  It looks as though it could be a grey and wet week in the north with Wednesday to Friday looking as though the sun will be totally absent (it should shine at some point on other days). There’s a 5-95% possibility of rain throughout the week. Temperatures start at 22C and drop to 14/15C from Wednesday onwards. Like the south, there is a yellow alert for high seas on Tuesday and strong winds on Tuesday and Wednesday.

Weather in East Tenerife –  The forecast almost matches that of the north apart from Monday looking cloudier and Friday looking sunnier.

Weather in South West Tenerife – Much the same as the south except it does looks as though it will be sunnier with only Friday afternoon looking seriously dull.

Weather in the Mount Teide Crater –  Even Teide National Park doesn’t look great with rain forecast for the crater every day and strong winds all week both at crater level and on the summit. Saying that, the sun will also shine every day in the park. The cloud will be quite low so it looks as though the summit of Mount Teide will be sunny all week, apart from a chance of snow this morning. But as it’s unlikely the cable car will be running due to the wind, there won’t be much of an opportunity to enjoy it. Temperatures in the crater will range from 4 to 8C and between -5 and 2C on the summit of Mount Teide.