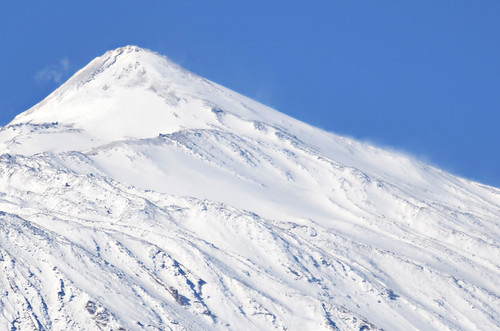 Weather Forecast for Tenerife from 14th to 20th April 2014
It’s a mixed bag for Easter week on Tenerife. The week will start on a sunny note but clouds will roll in from Tuesday afternoon bring the chance of April showers. The south and south west look as though they will have more clouds than the north and east where the chance of showers is more likely. The situation at the coast improves again by Easter weekend with plenty of sunny spells forecast, although inclement weather involving very strong winds on El Teide’s slopes makes us wonder if it’ll be a re-run of this week. Temperatures on the coast will drop a couple of degrees but it will still feel very warm in the sunshine.

Weather Forecast for Tenerife 7th to 13rd April 2014
The unsettled signs from the mountain proved accurate in the end. A mainly sunny and hot week ended on a stormy note with a cloudy and windy Saturday and weather alerts on Tenerife. The north saw the strongest wind, whilst the south experienced most rain. It was short-lived and Sunday dawned a gloriously hot spring day, revealing Mount Teide looking as white as it has done all winter.

Weather in South Tenerife –  Although the week starts off on a sunny note, cloud rolls in from Tuesday afternoon and it could be quite gloomy until Friday when the sun should reassert itself. There’s a 5-35% chance of rain from Tuesday onwards and temperatures will drop slightly this week to the low 20s in the shade.

Weather in North Tenerife – Even though there’s more chance of April showers in the north (5-85% possibility), there’s also more sunshine with only Wednesday afternoon looking as though it’s sun free. Like the south, the temperature will drop by a couple of degrees with temperatures 17/19C in the shade.

Weather in East Tenerife –  Looks like the cloudiest place on the island with heavy cloud every day except Monday morning and Friday afternoon. Easter weekend looks very gloomy. There’s a 5-55% chance of rain most days.

Weather in South West Tenerife – The south west looks a slightly better bet than the south for sunshine with only Tuesday afternoon and all day Wednesday being devoid of decent sunshine although there will still be some cloud over the weekend. Like everywhere else it’s likely to be a week of showers (5-45%) with temperatures in the low 20s.

Weather in the Mount Teide Crater – Not quite the usual blue skies and sunshine in Teide National park with cloud forming on Monday, Thursday and Friday afternoons as well as over the weekend. Temperatures in the crater will range from 9 to 12C in the crater and 1 to 5C on the summit. It’s also going to be a windy week on Mount Teide with strong winds from Monday evening gathering force as the week progresses resulting in some seriously windy weather by the weekend. The cable car is currently not operating because of the snow and ice.