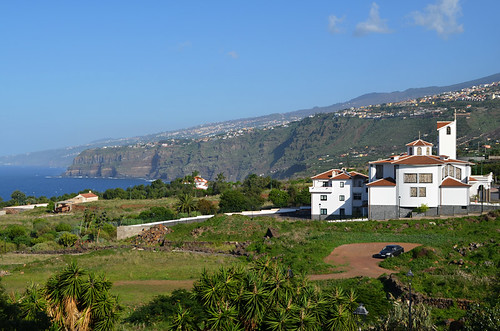 Weather Forecast for 7 to 13 December
Again the Spanish weather forecasters got it more or less right with the north of Tenerife experiencing a beautifully sunny week after a cloudy start and the south enjoying a mix of sunshine, cloudy spells and even a bit of calima-like high cloud which also turned northern skies white on Sunday. If it rained, we didn’t see any. However, although warm in the sunshine, by the second half of the week we noticed the air in the shade and after dark was on the cool side. Saying that, a light jacket was still more than enough for me on Saturday night.

Weather Forecast for Tenerife 14 to 20 December
It’s another good looking forecast with most places experiencing similar weather – mostly sunshine apart from some cloud on Wednesday. It should start hot on most coasts and then level out to being lovely and warm during the second half of the week. There’s a bit of a change on Sunday when the clouds roll in and there’s a good chance of rain everywhere. On the whole, a good week for sunbathing and walking on Tenerife.

Weather in South Tenerife –  In the main it should be a sunny week in the south of Tenerife although light calima might make Monday and Tuesday a bit of a white-out. Apart from that, the only significant cloud should be on Wednesday morning and Sunday when there’s a 50% chance of rain. Calima means temperatures start the week at 27C, rising to 30C on Tuesday before starting to settle around the low to mid 20s for the rest of the week. Sunday however will see a drop to 18C in the shade.

Weather in North Tenerife –  The calima won’t affect the north as much so it should be a  sunnier start which will continue to the weekend, except for Wednesday when a cloudy morning will turn into a cloudy afternoon with sunny spells. The sun is set to return until Sunday which could be cloudy with a 60% chance of rain. Temperatures start the week at a more seasonal 23C before dropping to 20/21C in the shade during the second half of the week. Sunday like the south, will see a cooler day with shade temperatures of around 17C.

Weather in East Tenerife –  Apart from a cloudy Wednesday morning it should be a sunny week in the east until Sunday when it will cloudy with sunny spells and a 60% chance of rain. Temperatures are set to match those of the north but as calima tends to affect east and south more than north and west it’s likely they’ll be higher than predicted at the start of the week.

Weather in South West Tenerife –  The outlook is more or less the same as everywhere else with a mainly sunny week (apart from Wednesday morning) until Sunday when it will be cloudy with sunny spells and a good chance of rain at some point (60%). Temperatures start the week at 25C before rising to 28C on Tuesday and then dropping slightly to 22/24C until Sunday when they will drop further to 18C.

Weather in the Mount Teide Crater – In the crater there could be a mix of sun and cloud throughout the week, with even overnight showers. Friday and Saturday should see a return to full on sunshine. On Mount Teide it’s a similar pattern except the overnight showers on Saturday could be snow rather than rain. Temperatures should hover between 10 and 15C in the crater and 1 and 6C on the summit of Mount Teide, which is almost balmy for this time of year.

The Tenerife Weather This Time in 2014
So what happened this time last year? “Finally the weather front that brought mixed weather to all parts of Tenerife decided to move on leaving more typical blue skies and sunshine in its wake…”

Pic: A typically December week along the north coast.