At the moment, we don’t actually include La Fortaleza in our walking routes in Teide National Park. It might seem an odd omission as it’s an excellent walk with a quite spectacular pay-off.

As walking trails go, it can be a bit of a hikers’ highway which is why we’ve opted for routes where the number of people thin out, or even disappear completely, as soon as you travel a few minutes from the tour excursion hot spots like the Parador and El Portillo Visitor Centre. 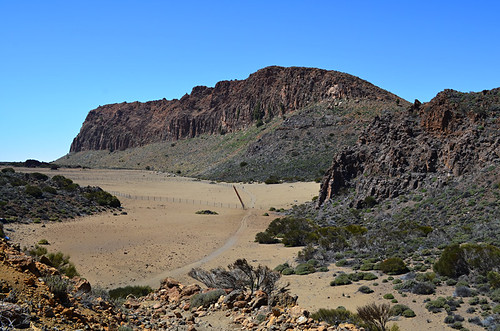 However, we’ve walked the route twice this year and there was quite a contrasting personality between first and second times.

In March it served as a good route to try-out a new camera rucksack and limber up the muscles before we headed east to spend eleven days walking across Fuerteventura. March is near the end of the main walking season on Tenerife and an ideal time for exploring Teide National Park. The sky is its usual intense blue up there but temperatures aren’t so sapping as in summer months. As a bonus, there was still some snow on Mount Teide. 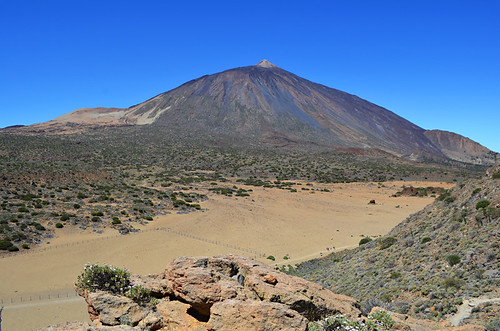 We walked two routes that day. One we include in our walking routes (we didn’t meet anyone else once we were away from the main paths) and La Fortaleza where it was ‘busy’. Busy is relative of course. When I look back at the pictures, there’s hardly a soul to be seen.

The oddest ‘walker’ we met was like a refugee from a hen night – pink cowboy hat and tottering along on high wedges.

Fast forward to July and I think we met only two other groups on the route. We wouldn’t normally walk in the crater in July but our nephew Liam was visiting. He loves Teide National Park and we wanted to show him a part he hadn’t seen before and La Fortaleza is quite an impressive sight. 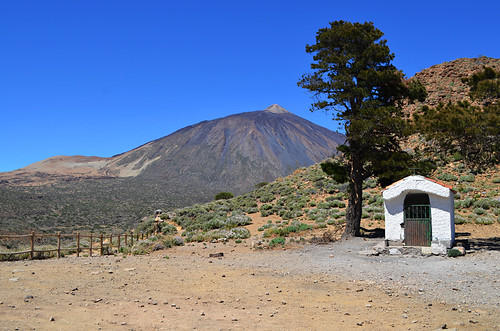 The path winds through a desert-like landscape with Teide, as always, dominating the scenery. Dominating that is until you climb a ridge to be faced with a wide sandy plain where the sheer volcanic wall that is La Fortaleza steals your gaze away from the volcano.

It is one of my favourite views in the National Park and one time when I like to see other people ahead when taking photos as their ant-sized forms really shows of the epic scale of the vista.

The path leads below the ‘fortress’ walls to a viewpoint overlooking Tenerife’s north west slopes if its clear, or a wonderful mar de nubes (sea of clouds) if it isn’t. A detour before La Fortaleza leads up a soft, sandy path to a small ermita and more ‘wow’ views. 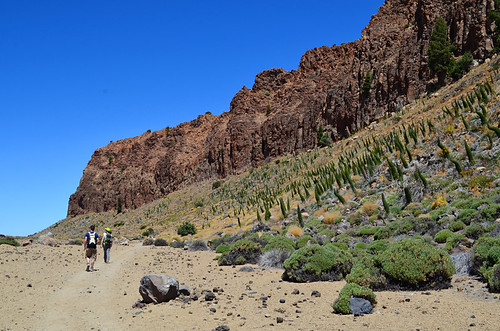 It’s not a particularly long route, but on a July morning the heat at altitude saps the energy. It’s a dry enough heat in winter, in summer combined with a searing, unrelenting sun it can make even shortish walks a tasking ordeal.

In winter we dismissed it as being too busy. But in July, despite the energy draining temperatures, we enjoyed the walk so much that by the time we returned to El Portillo we were questioning our decision to leave La Fortaleza out of our Hiking Highs package.

The jury is still out. Maybe we’ll just have to walk it a third time this year to get a casting vote.