Last week we swapped walking in Tenerife’s hills for checking some of the coastal routes we include in our Captivating Coastlines mini guide that we give to everyone who buys any of the Real Tenerife guides.

We’re as guilty as many people of looking inwards when we get the urge to go for a hike, temporarily forgetting that some parts of Tenerife’s coastline are an absolute joy to explore. 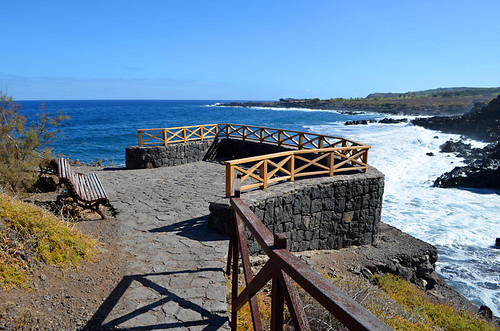 The north coast especially has some great short(ish) coastal routes. If plans are ever seen through to the end, those might become one long route (again) some day… way into the future. But for now the paths are in sections.

On one glorious day we walked three routes, notching up around 20 kilometres.

The most westerly section at Buenavista del Norte is particularly good in summer months when there’s more beach than in winter and mirror-calm rock pools are irresistibly inviting. There’s an interesting contrast between two very different faces of Tenerife along part of the route. The slick greens of the golf course with polo shirt clad golfers seem worlds away from the lava formations populated by a handful of local fishermen catching sea bass from the rocks on the other side of the walkway that separates them. 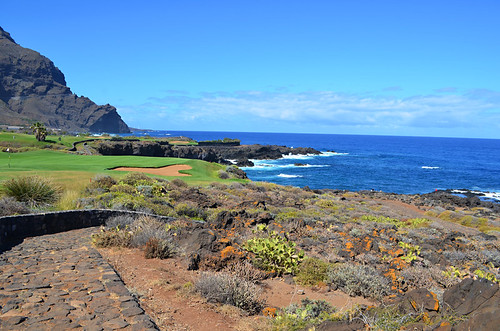 The scenery reminds why this area was called Buenavista (great view). However, it was disappointing to see  one of the most spectacular pools on Tenerife, an infinity pool set into the rocks, had been abandoned.

When we write about places off the beaten track we sometimes have comments saying ‘don’t tell anyone about this place, keep it a secret.’
It’s tempting when we find ourselves alone in less well known scenic spots, but the downside to that suggestion is there’s a danger that no visitors means no income for locals. Subsequently some interesting places shut down due to lack of business. We’ve seen this all over the Canary Islands.

The second section around San Juan de la Rambla is a real curio. The past lies heavily in the air along a flower-lined, cobbled camino real (merchants’ trail) that links old haciendas (some crumbling, some in immaculate condition), intriguing cottages of all shapes and sizes and forgotten hamlets. It feels as though not a lot has changed along this way in centuries. 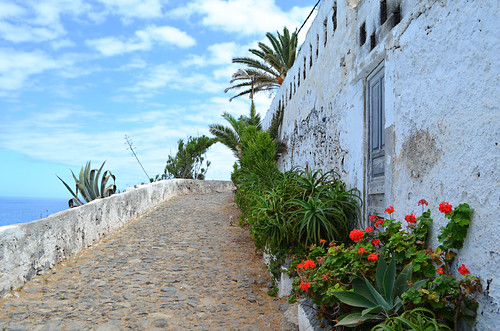 Last time we walked the route, it ended abruptly at the bottom of a barranco (ravine). This time a ‘new’ rough path continued up the other side and we were able to carry on, passing more old houses, to a small pebble beach with a rock that was a bit of a mini version of Los Órganos on La Gomera.

The final section is probably our favourite. The coast below Los Realejos doesn’t just have one coastal path, there’s a network of them – all leading to something interesting or unusual. One way leads through banana plantations, passing elegant haciendas which have seen better days, to hidden coves with a Caribbean flavour and turquoise water. Another descends through palm groves to more coves, some linked by tunnels, and a fort (currently out of bounds). Yet another contours the coast, crossing ravines and apparently ending in a ‘run of the mill’ housing development before emerging at one of the biggest surprises of all, a lovely bay with two huge rocks, one with an arch. 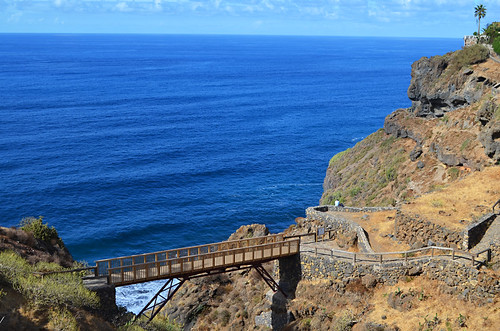 They’re not particularly difficult routes. Anyone with reasonable fitness levels could enjoy them. Although doing all three on the same blisteringly hot September day was more challenging than we anticipated. It was exhilarating walking and a reminder of just how many diverse faces Tenerife has, loads of them still unseen by most visitors.