The climb was steep and the path was narrow. The hillside rose up sharply on one side and dropped away on the other. Blocking my way right at the top of the incline was a girl on a mountain bike. There was no place for either of us to go. I had to carefully inch my way around her on the side where the path fell away.
It was a relatively dangerous manoeuvre and I wasn’t a happy bunny at having to do it. The narrow walking trail wasn’t big enough to accommodate both hikers and bikers. 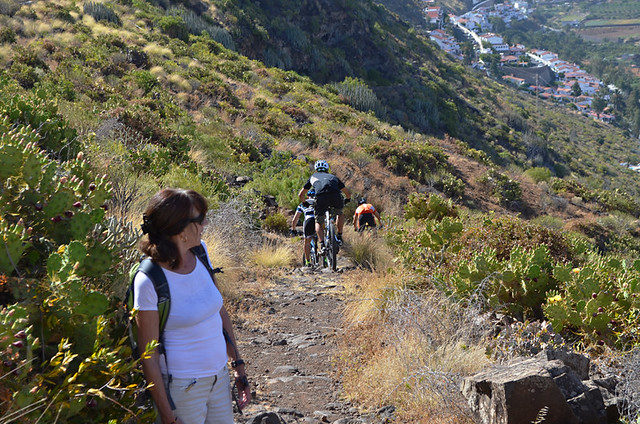 Walking Guanche and goat trails is something that dates back centuries on Tenerife, journeying along them on foot is a tradition. Having to make way on one for a cyclist annoys the hell out of me. It seems no different than if a cyclist had to leave a cycle path because someone was driving their car along it.

The wide forest pistas are no problem, it’s the narrow paths where there’s a real issue and a potential danger. You shouldn’t have to worry about getting hit by someone on a vehicle on a narrow walking path. The most ridiculous case was in a forest in Austria where a cyclist on a unicycle nearly ploughed into Andy because they were concentrating so much on the terrain they didn’t spot there was someone in front of them.

The issue isn’t just one of potential danger. It’s also about the quest for thrills affecting the countryside as well. 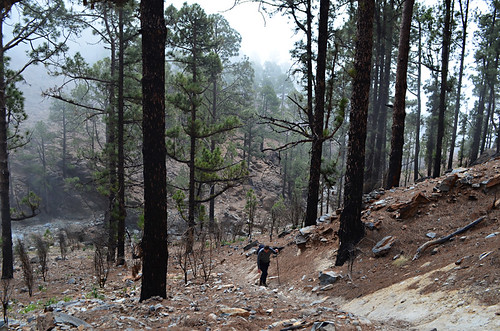 On the same route where the cyclist blocked my path, we took some wrong turnings along trails that were clear paths. It was only after this happened a few times the penny dropped. They weren’t true paths at all, they were trails made by mountain bikers churning up new routes down slopes. In one spot in the forest above Vilaflor it was almost impossible to be able to identify our real route. That might not be a problem when you’re careening through the forest on two wheels, but it is when you’re route finding in a forest where there are no signposts to show the way.

Luckily it’s something which doesn’t affect a lot of Tenerife, and I hope it stays that way. Anyone showing a lack of respect for the countryside and for others who use really rattles my cage. 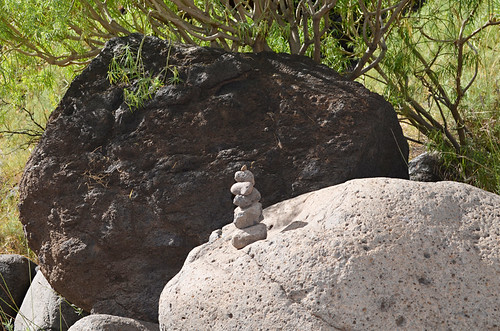 Another ‘newish’ problem we’ve noticed is related to cairns. Normally cairns are walkers’ friends, a little pile of stones showing the route when the path ahead is unclear. But twice in recent months we’ve found ourselves at a dead end after being duped by cairns.

Recently on a slope in a forest in the south of Tenerife we looked over a landscape where there were cairns in all directions. It was confusing as hell. Basically, what had happened was people had strayed from the path and made their own way across a pine covered forest floor, leaving a trail of ‘helpful’ cairns behind them. The trouble was that clearly many of them hadn’t chosen their route wisely and the cairns led to nowhere. It wasn’t very helpful at all. It took three of us some time to link up again with the true path thanks to the profusion of false waymarks. 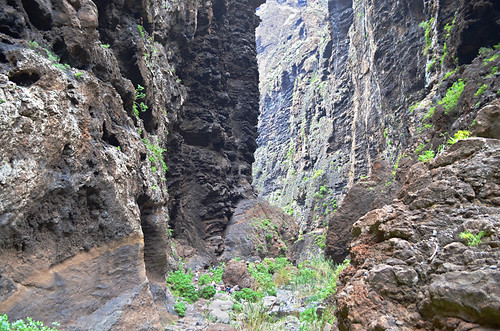 There’s a similar problem in the Masca Barranco. I don’t know if some folk think it looks nice to build a wee pile of stones, but I wish they wouldn’t unless they understand what they are doing. Masca attracts a lot of inexperienced walkers so I can see why it happens there.

Well placed cairns are extremely helpful, but they shouldn’t be built unless anyone is 100% sure their route is the correct one, otherwise you end up with a similar situation to the false bike trails.

Which brings me nice and neatly back to the beginning of this piece.

The steep path I mentioned at the start of this rant wasn’t the correct walking path at all. The real path wound up the hill more gently. Thanks to the bike trail it had become almost invisible to walkers. We didn’t spot this till the next time we walked the route. Not only had the cyclist blocked the way ahead, she’d obscured the entrance to the original path. When we realised this we built clear cairns to show which way was the correct way. 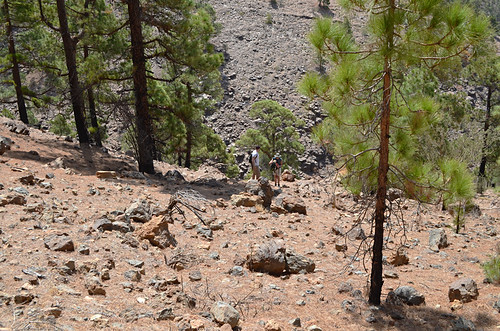 In the end, whether hiker or cyclist,  it’s vitally important to show consideration for others and think about the consequences of actions.