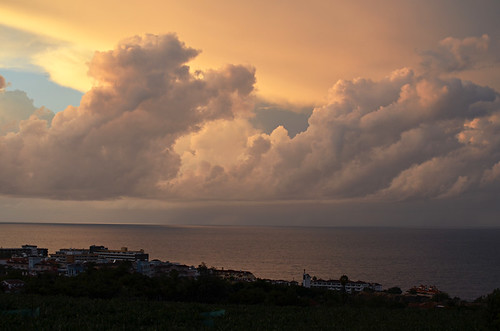 Tenerife Weather 31 October to 6 November
Although it didn’t pan out quite as expected the forecast wasn’t bad given the unpredictability when an Atlantic storm passes nearby. There was plenty of sunshine everywhere although Thursday was definitely a dreary day. We were in the south and the faces in the hotel around us were as glum as the clouds. There was some rain but not much… until Saturday. A yellow weather alert for heavy rain everywhere except the north turned into an orange level alert for all of the island, but only after there were raging rivers rushing through normally dry barrancos. In the end, the east of the island along with the north coast down to the Orotava Valley experienced a fierce deluge on Saturday afternoon. By Sunday the sky was clear and the sun shining hotly.

Weather Forecast for Tenerife 7 to 13 November
It looks like one of those November weeks which has prompted us over the years to advise friends and family “If you’re coming to Tenerife for just a week, don’t come north in November, you might get unlucky.” Where the south and south west looks as though it should be dry with cloudy spells and possibly only a light shower or two, the forecast is for rain at some point every day in the north and east. However, sunshine is predicted as well so it might be one of those weeks which pleases both farmers and visitors. The rain extends to Teide which could see light snowfall on the summit but it doesn’t look like anything to write home about at this point. Temperatures everywhere could be a few degrees lower than of late.

Weather in South Tenerife – Although there’s a chance of rain on Monday afternoon (70%) and a slight chance of showers for the rest of the week (5-20%) the forecast is for a week where there’s a mix of sun and cloud every day and shade temperatures which stay around 23/25C all week.

Weather in North Tenerife – It’s a different outlook for the north where although the forecast is also for sun and cloud every day, there will almost definitely be intermittent rain throughout the week with the possibility of showers veering between 50% and 95% each day. Shade temperatures could stay around 20/22C all week.

Weather in East Tenerife – The outlook for Santa Cruz is for quite a damp, grey week with no sunny spells forecast for Tuesday, Wednesday and Sunday. Like the north, rain is likely at some point each day (45-95%). Temperatures should stay around 20/22C all week.

Weather in South West Tenerife – The south west mostly mirrors the south except there’s a 60% chance of rain this afternoon and temperatures should hang around 22/24C all week.

Weather in the Mount Teide Crater – It could be yet another mixed week in Teide National Park with the sun shining every day but also with rain showers expected at some point. On the summit of Mount Teide there should be a lot of sunshine but Monday, Tuesday and Friday afternoons could see snow showers whilst there could be light rain throughout Thursday. Temperatures should hover between 9 and 11C in the crater and -1 and 4C on the peak of Mount Teide.

The Tenerife Weather This Time in 2015
So what happened this time last year? “It was a hot, hot week on Tenerife thanks mainly to the calima which lingered for most of the week and which was uncomfortably thick on Friday to the point it even affected the north more than usual.”