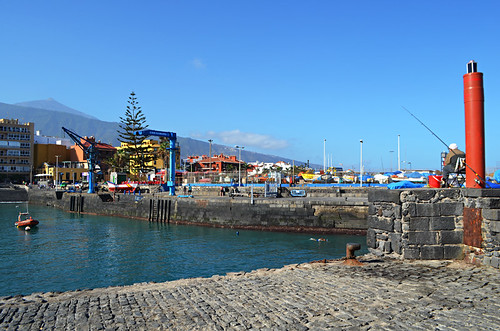 Tenerife Weather 17 to 23 October
Again it turned out to be a far better week than expected on Tenerife. Until Saturday it was mostly hot and sunny, although there were some cloudy spells in parts. A storm in the Atlantic to the north brought heavy rain to northern Tenerife on Saturday night and Sunday, with outdoor events being cancelled in Puerto de la Cruz and La Orotava.

Weather Forecast for Tenerife 24 to 30 October
It looks like it is going to be a wet and gloomy week across Tenerife with a yellow level weather for rain in the south and south west on Monday and Tuesday and in the east on Tuesday whilst the north has a yellow alert for high waves on Monday and Tuesday. There could be thunder and lightning at times and Teide looks as though it’s going to have its first white coating of the season. Although there will be sunny spells as well, it mostly looks as though the only difference between areas will be the intensity of the rain. Things should brighten up for the second half of the week but it could be Saturday before we see normal service resumed. I could place a bet now there will be surprise at this ‘unusual’ weather… even though it happens almost every year at some point between late October and early November when the seasons change.

Weather in South Tenerife – Although the forecast is for a week where there could be a lot of rain and cloud, the only day when the sun won’t shine at all could be Wednesday. There is a yellow level weather alert for rain on Monday and Tuesday. Rain is expected every day until the weekend where the likelihood drops from 100% to 35/45%. The week starts with shade temperatures of around 23C but by the weekend it should be 27/28C.

Weather in North Tenerife – It’s a similar picture in the north except the rain might not be as intense and the sun could shine every day at some point. Like the south, the chance of rain drops by the weekend to 35/55%. Temperatures start the week at 20C and rise back to 23/25C for the weekend. Whilst there is no alert for rain there is one for high seas with waves of up to 5m expected to hit the coast.

Weather in East Tenerife – The pattern for Santa Cruz is much the same as the north except the weekend is looking quite a bit brighter than other parts of Tenerife with only a 20/25% possibility of showers. Temperatures start the week at 20C and then climb to 23/24C for the weekend. There is a yellow level alert for rain for Tuesday only.

Weather in South West Tenerife – The south west mostly mirrors everywhere else with a rainy week up until the weekend, although the sun should come out at times every day. Saturday and Sunday should be much brighter with only a 35 to 45% chance of showers. Temperatures start the week at 21/22C and, like everywhere else, climb to 26/27C for the weekend. There’s a yellow level weather alert for rain on Monday and Tuesday.

Weather in the Mount Teide Crater – It could be a dramatic week in Teide National Park with heavy rain, thunder and lightning and no sunshine between Monday and Wednesday. The second half of the week should be brighter and although there could still be showers there should be plenty of sunny spells. On the summit of Mount Teide the conditions and seriously low temperatures could result in snow this week with only Friday looking cloud-free. Tuesday looks particularly gloomy on high. Temperatures should hover between 8 and 15C in the crater and -4 and 3C on the peak of Mount Teide with the wind chill factor making it feel more like -11C at times. The passing storm will bring high winds at altitude. The weather conditions mean the cable car service is likely to be affected throughout the week.