Stating ‘the best’ of anything is purely a subjective business. On Tenerife it’s particularly difficult to choose between walking routes as there’s such a diversity of scenery and terrain (forests, coastal routes, volcanic badlands, desert, verdant valleys, deep ravines) that pitting them against each other isn’t comparing like with like. We have many favourites, but there are some which stand out more than others because they’re full of the ingredients we expect from a great hike.

Without further ado, these are our pick of ten of the best hikes on Tenerife, and why they’ve made it onto our top ten list. 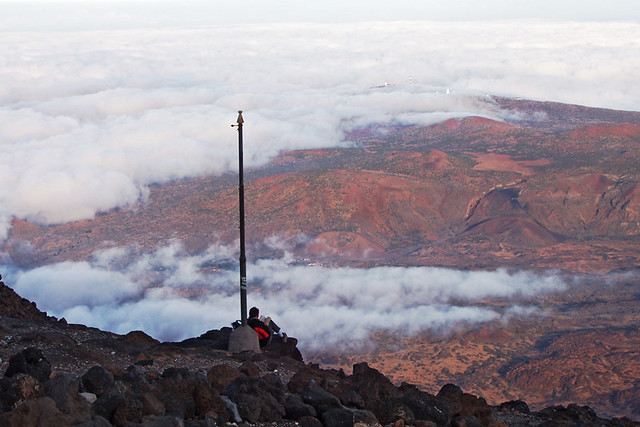 Climbing Mount Teide (10km), Teide National Park
It’s unique, simple as that. Climbing from Montaña Blanca to the summit of Mount Teide earns you the right to boast you’ve conquered Spain’s highest mountain. It’s not long, but the sparseness of air adds to the difficulty level. After many, many hiking experiences in various countries, watching sunrise from the freezing summit of Mount Teide remains one of the most exhilarating travel experiences we’ve had. 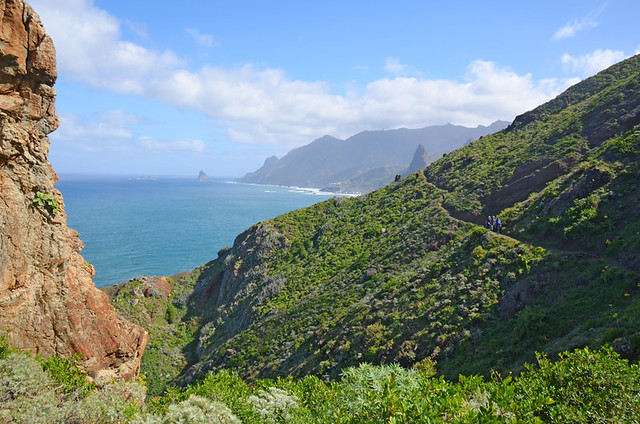 Afur to Taganana (13km), Anaga
We could pick from any number of routes in Anaga as it is our favourite area for walking on Tenerife. The first time we tackled the Afur-Taganana route was under gloomy skies. It didn’t register just how exceptional a route it was until our next time walking it when the sun’s rays filled that rugged Anaga coastline with colour. It’s remote, and the scenery is staggering – lush slopes, jagged peaks, white-washed villages in deep ravines, gurgling streams, ponds filled with singing frogs, lonely vineyards. It’s a route to make the soul soar. 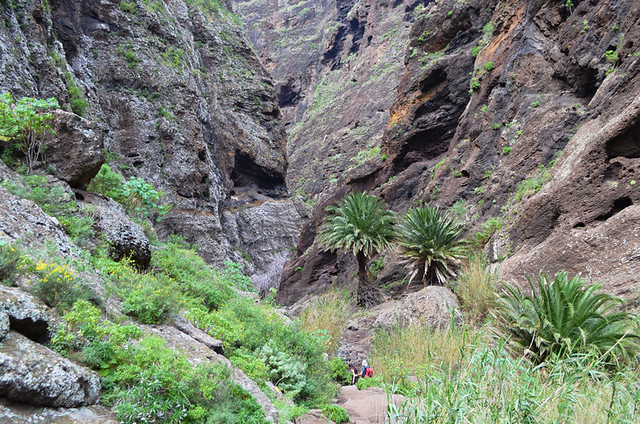 Masca Barranco (6km), Buenavista del Norte
Yes, it’s still closed (Jan 2020), but it will open again. Summer 2020 is now the estimated date, although you never know with Tenerife. Masca might have been one of the busiest walking routes on Tenerife (that should change when it reopens – at least one upside) but it is another quite unique experience. A seasoned walker friend described it as more of an adventure trail than a walking route due to the need to scrabble down boulders, negotiate rock tunnels, balance on stepping stones across pools etc. It might lose some of that character after it’s been ‘made safer’, but it should still be a memorably atmospheric ravine walk. 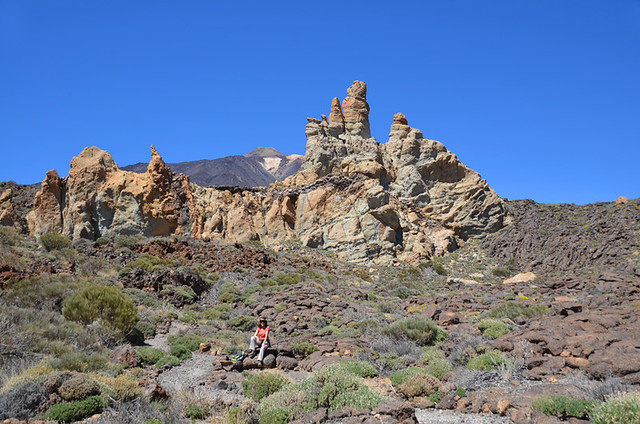 Roques de Garcia (4km), Teide National Park
It’s short and near one of the busiest car parks you’ll find on Tenerife, yet the Roques de Garcia circuit isn’t particularly busy. The misshapen volcanic rock formations may look impressive from the coach-filled car park; however, from the Ucanca Plains level they are especially ancient and other-worldly in appearance; the best examples of twisted volcanic pinnacles you’ll find in the park. Plus there’s the imposing Cathedral which is sort of anonymous from car park level. There’s also a wheelchair-friendly route at Roques de Garcia. 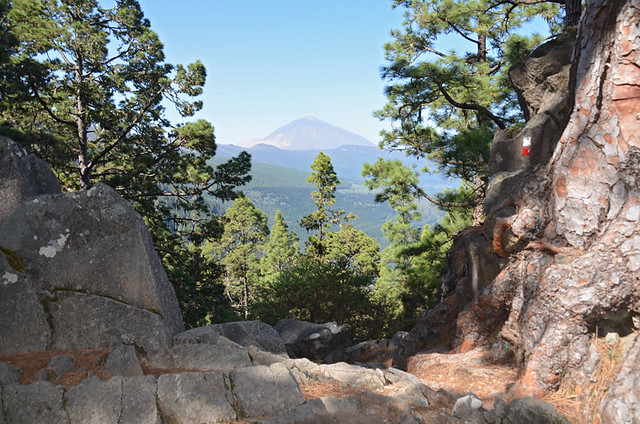 Los Órganos (12km), La Orotava
This was the first decent-length walk we undertook on Tenerife and it remains a favourite. Victorian adventurers waxed lyrical about the Orotava Valley and the Órganos route illustrates why – a dense forest of pines sweeps across the valley to the base of Mount Teide, looming over the north like a giant. When the mar de nubes settles in just below Aguamansa, the more developed lower valley is totally obscured, creating a virgin landscape and a scene which is no different from the one travellers in other centuries wrote about. 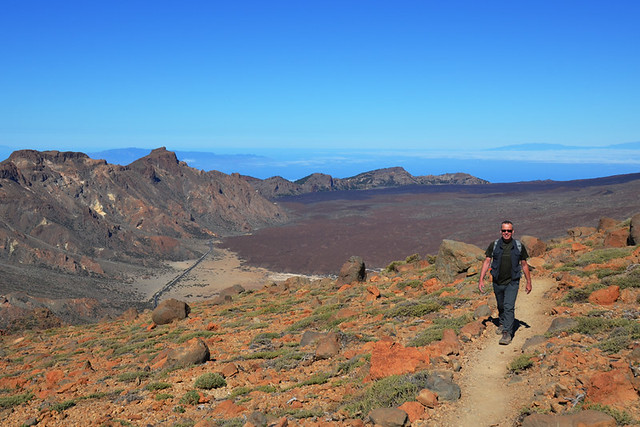 Montaña Guajara (11km), Teide National Park
In some ways ascending Montaña Guajara is better than climbing Mount Teide because the panorama from its summit includes the park’s centrepiece. But Guajara isn’t just about elevated views of El Teide, it’s a superb route in its own right; the path along Siete Cañadas climbing to the crater ridge where the slopes fall away toward the south east and the Atlantic, so you have contrasting views of inside and outside Teide National Park. The route was enhanced a couple of years ago when the authorities improved the path descending to the crater from the southern side of Guajara – it’s a spectacular return to crater level. 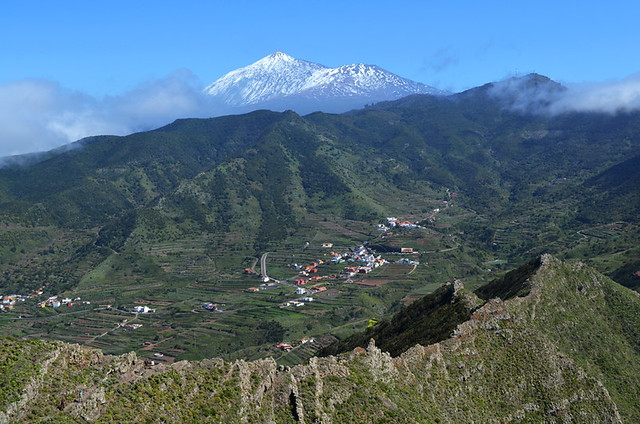 El Palmar to Teno Alto (11km), Teno Rural Park
Almost the perfect walking route according to one of our friends at Inntravel in the UK after we took him on it. We wouldn’t argue with that description. It has everything we want from a walking route – epic scenery; quirks; mountain hamlets and valley villages, goat-trail paths above a shimmering sea; profusions of wild flowers in spring; a ‘you can’t be serious’ moment when the path seems to simply disappear at a knife-edge ridge; and mouth-burning cheese. 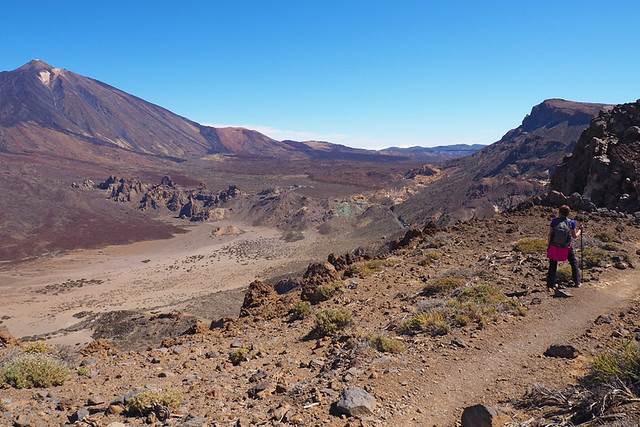 Vilaflor to the Parador (16km), Vilaflor and Teide National Park
This is one we pieced together for an Inntravel walking holiday starting in the south of Tenerife, designed to take customers from their hotel in Vilaflor to the Parador Cañadas del Teide via pine forest and the crater ridge. It has the most punch-in-the-gut pay-off of any walking route we’ve walked anywhere. I wrote about it recently as we consider it to be the best walking experience we’ve had on Tenerife. It’s not included in our own walking routes as it isn’t an easy one to do unless someone else is transporting your luggage from Vilaflor to the Parador. 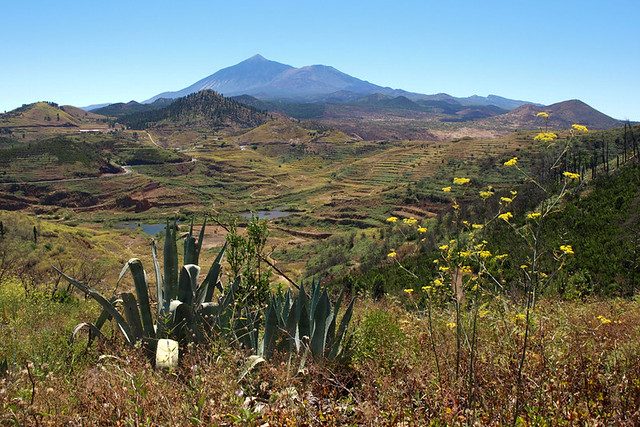 Erjos Pools (6km), Los Silos
Short and sweet and included because walkers get to experience a sense of walking in ancient laurel forest without having too put in too much effort, the views are exceptional, and the Erjos Pools are a curio on Tenerife – great for birdwatchers and a good place to watch electrifying dragonflies. It’s our favourite short walk on Tenerife. 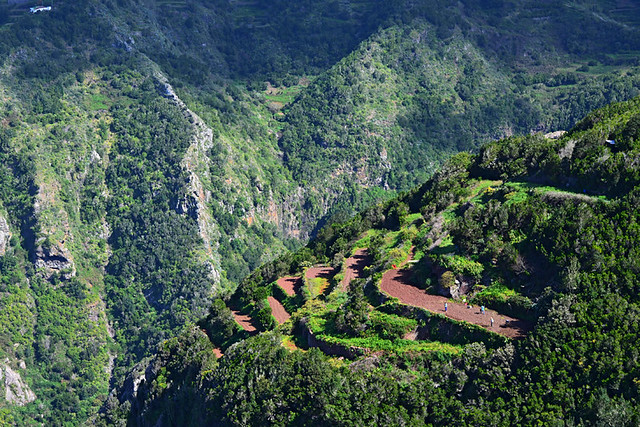 Cruz del Carmen to Chinamada (13km), Anaga
We love this walk and would happily walk it over and over and over. It’s one of the more accessible Anaga walking routes; although, nowhere in Anaga is walk in the park easy – there’s still a 400m ascent/descent to tackle. It’s a trail which showcases why we rave about walking in Anaga – the misty, atmospheric forest opening out to reveal terraced slopes and plunging abyss after plunging abyss before the path reaches the halfway point at a troglodyte village. The return route includes views across one of my favourite landscapes on Tenerife which, if you walk it when the terraces are being worked, illustrates exactly why we named this route ‘Stepping back in time.’

Apart from Vilaflor to the Parador, all the walking routes mentioned above are included in our Real Tenerife Island Walks sets. Click here for more information about them.

Opened in March 2010, the beautiful Rural Hotel Señorio Del Valle in Santiago del Teide is the ideal place to base yourself for one or two nights to explore the valley’s excellent walking trails. […]