It’s the sort of morning that makes me realise why the birds sing so enthusiastically at a time when much of us are still enjoying the caress of a warm duvet. The sky is clear, visibility sharp as an HD TV. Way below, I can see Montaña Roja clearly outlined against the sea on the coast near El Médano. 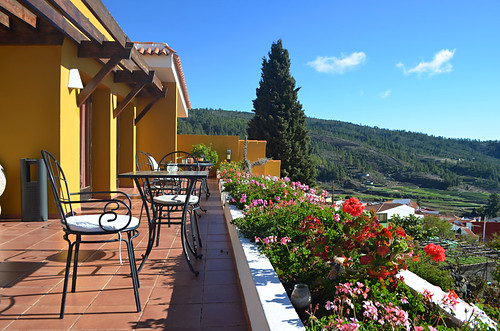 A stunning November morning on Tenerife, perfect in every way but one. An alert level storm is heading our way, creeping in from out in the Atlantic to batter La Gomera before launching an assault on Tenerife, starting with the south coast.

Normally when it’s one of those irregular times when there’s a storm alert, we stay well clear of the hills. But we’ve booked a night in a rural hotel, Alta Montaña, in Vilaflor so we’re committed.

The storm isn’t due to arrive till late afternoon, around 4pm. In theory we’ve got time to reach the Paisaje Lunar and return to the hotel before it arrives… as long as the Spanish weather forecasters are right. 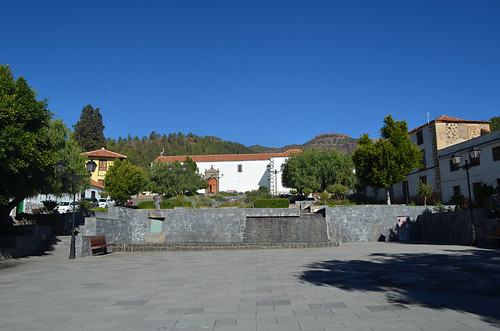 It’s almost impossible to believe a storm is coming as we set off, winding through Vilaflor’s sleepy, sunny streets to reach the edge of the pine forest. It’s ideal walking conditions. Wonderful visibility, the less hot November temperatures getting on a treat with exposed skin, the clarity of light saturating the pines and potato plants, which thrive here, with vibrant shades of green.

An hour later and the world above the south coast has changed. I’m still not too worried. The misty fingers dancing their way through the forest aren’t from any storm, they’re bruma; low cloud which gets a kick out of poking chilly fingers at your bones. 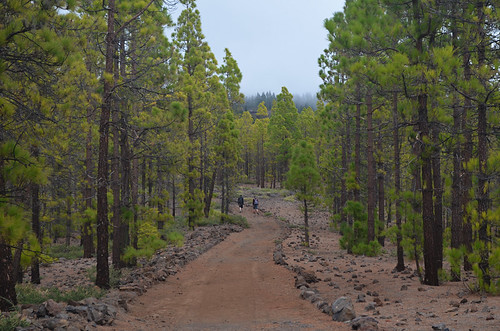 This time, however, it’s only a toddler version and not malevolent enough to pierce our jackets… not too much at least. But it does drain the colour from the landscape.

The thin bruma keeps us company as the pines are joined by anarchic rocks whose wild forms are calmed somewhat by the dull lighting. It’s the first sign we’re getting close to the bizarre looking pinnacles that act as a unique marker to the half way point of the route. 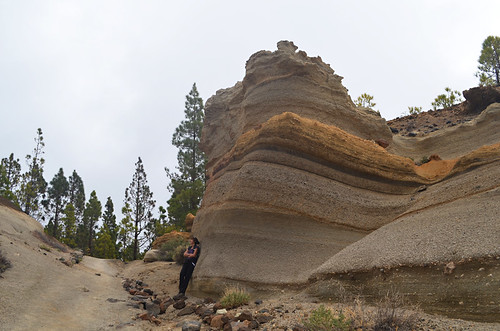 We reach the Paisaje Lunar with our unwanted walking friend still lingering. Their surreal beauty and pale orange tones are diminished by the colour-robbing bruma. But even so, they impress as always.

We sit on a stone bench munching jamon and queso bocadillos, the Spanish hiking staple, and watch wispy cloud fingers prod and smother the rocks. With one eye on the clock, we don’t spend as much time at the lunar landscape as we normally would. We’ve still got a storm to outrun. 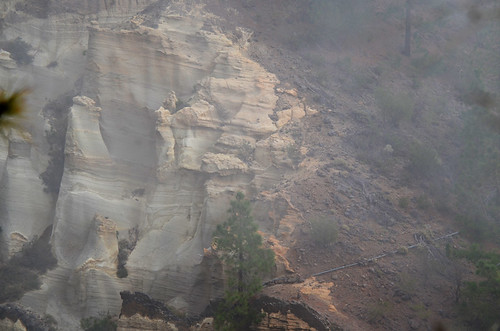 As we head for home, I constantly check the skies and cloud formations for the slightest clue that something wicked this way comes. Behind us, to the east, the bruma has fattened, morphing into something obese and bruised that looks ready to burst.
Whilst I’ve been concentrating on the west, a heavy rain cloud has snuck up from the other direction. It can’t be the storm, but we quicken our pace anyway, to try to outrun it. 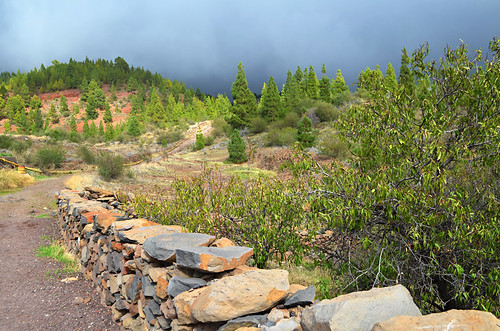 It’s the second time we’ve tried to outrun rain in the space of a week. The last time was a squall, sailing in from the sea; its path as clear as if there were a line of arrows for it to follow. That time was about as close a call as you can get. We reached a bus shelter just as the heavens exploded, unleashing a monsoon downfall of biblical proportions.

We don’t always time it quite so perfectly.

We hurry through the forest with the petrol cloud, thankfully, lazily rolling along behind us, throwing a few taunting spits our way. But we stay just ahead of it. As we reach the last stage of the route, the descent into Vilaflor, it seems to accept its bullying isn’t going to work this time. 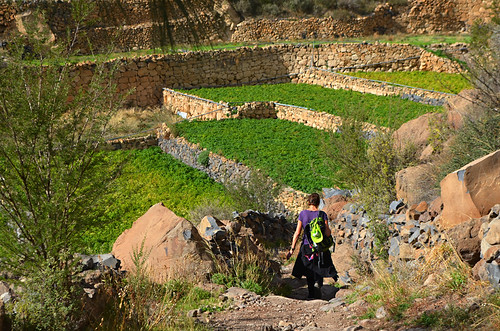 The rain cloud gives up, almost coming to a full stop. Its bruma offspring do the same and like magic, once again we are in full sunshine. It’s a startling and welcome transformation. A drenching is off the agenda.

The return to Vilaflor is as pleasant as the journey out earlier in the day and we end on the sun soaked terrace of Alta Montaña, after a quick detour to the bar for a couple of beers, surveying a sweeping vista that takes in a generous slice of the south coast. 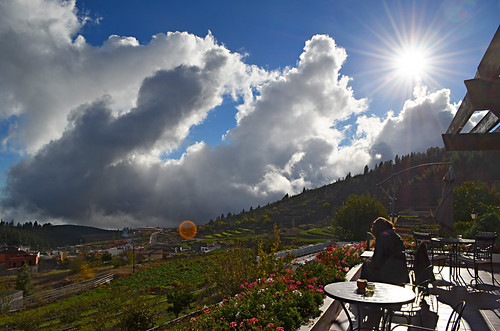 Just below us, from a westerly direction, dark and dangerous looking clouds are just starting to creep along the coast.
The sunshine kisses our faces, and a light breeze whispers ‘well done’ as we ‘salud’ and take a drink of our reward. We sit silently for a few moments, hypnotised by the movement of the storm clouds below us.

I break from my trance to check the time.

Six of our favourite rural watering holes on Tenerife

When we select walking routes to include in our guides we like them to possess certain ingredients. Ingredients which we want from a walk, the sort of things which elevate them to be more than just a nice walk with lovely views. One of these ingredients is, whenever it’s possible, that there’s somewhere amiable nearby to enjoy a post-walk beer. […]