When it comes to being properly equipped for walking in Tenerife and in the Canary Islands in general, footwear takes top priority. Since moving to the islands over a decade ago, finding the right hiking boots has been something of a challenge.

When Jack and I first took to the trails to begin exploring our newly adopted island home, I alternated between sandals in summer and boots in winter. My sandals were a sturdy pair of Merrells which had accompanied me on travels across the world and were the most comfortable footwear I owned. My boots were a heavy, chunky pair of Hi-Tec boots which were bought for a Glastonbury Festival weekend in 1991. 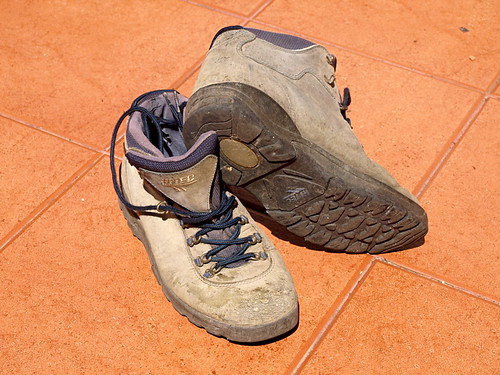 It didn’t take me long to discover two things. Firstly, open sandals were only good for summer walking and only for routes that didn’t take me anywhere near lava trails because if they did, I’d spend half the walk trying to remove small stones lodged under my feet. Secondly, my Glastonbury boots were too hot and too heavy for the distance and terrain I was walking. 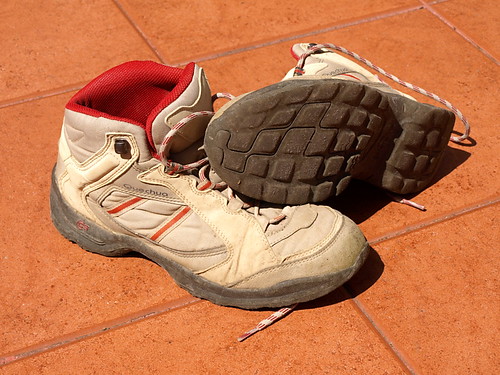 A visit to Decathlon resulted in me acquiring a pair of Quechua hiking boots. Lightweight and incredibly good value at under €15, I wore those boots until they wore out when I promptly bought another pair, this time pushing the boat out to €21.99. The funny thing is, it wasn’t until I went hiking in the Pyrenees that it struck me how much I could feel every stone underfoot, something I had simply accepted as being a part of the hiking experience, albeit not a very pleasant one.

It was also while I was hiking in the Pyrenees that I ended up mid-calf-deep in a river and from that time onwards, the right boot rubbed blisters on my heel every time I walked more than the distance from the house to the car. I would end up with great wads of plasters on my heel and still not feeling comfortable. I decided to revert to my Glastonbury boots to see if I could eliminate both the heel blistering and the foot bruising that resulted from soles that weren’t thick enough to cope with the rocky terrain that dominates the Canary Islands. I was only half successful. My Glastonbury boots eliminated much of the impact of stepping on sharp stones but oddly, they too rubbed my right heel and caused blisters in no time at all. I was beginning to wonder if my right foot had grown larger since moving here. 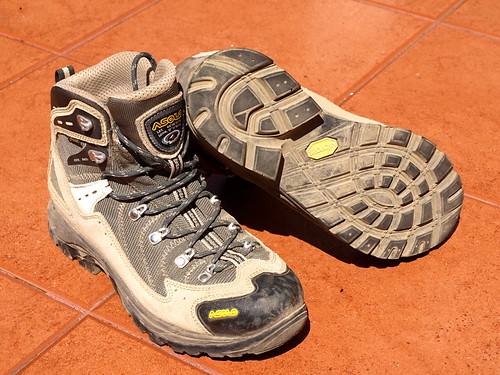 A couple of weeks ago, tired of having a sore heel and having plasters as a regular feature of the shopping list, I decided to bite the bullet and invest in a good pair of hiking boots. Another trip to Decathlon, a trying on session that included trekking boots from the men’s section as well as the women’s, and I finally came away, €120 lighter, with a pair of Asolo Fission GTX trekking boots. 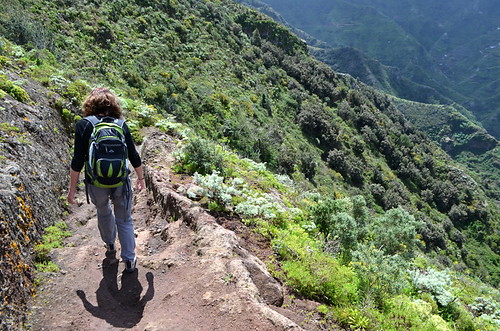 I’ve worn my new boots half a dozen times now, from creating a new route in Garachico, to  the Anaga Mountains and Teide National Park and I can honestly say, my feet felt as if they were walking along a sandy beach. With hiking trips to Cape Verde, the Bavarian Alps and La Gomera imminent, my new footwear will really be put to the test but I’m confident my feet will thank me for this investment, my heel already has.