Morning at the Yellow Mountain
Mid march and there’s not a cloud in the Tenerife sky, neither is there a breath of air. It’s beautiful weather for a coastal walk. Initially we pass plenty of other people, some dressed as though heading to the beach rather than a walk through arid malpaís. The yellow-tinged terrain is broken by splashes of pink-red orchilla and bulbous prickly pair balanced on the edge of cactus paddles like tin ducks in a shooting gallery. 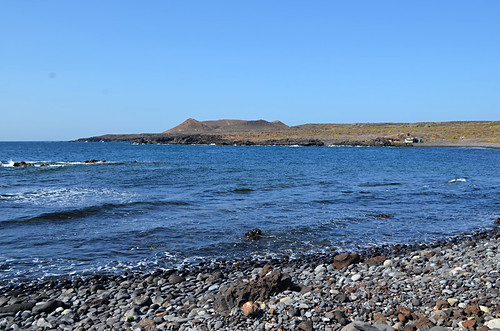 There’s a slight haze in the air, the advance party of a dusty calima heading our way from the north east, an unwelcome present from Africa. But for now the visibility isn’t too bad and we can see Mount Teide peeking above the crater wall, almost anonymous amongst the other mountains that shield the bulk of its frame from southern eyes.

It’s easy walking and we chat endlessly as we follow a path past a makeshift abode where an old couple with faces the colour of saddlebags play cards beneath a gently billowing cloth that only partially protects them from the sun. Beside them, the Canarian equivalent of the Hound of the Baskervilles dozes in the dust. 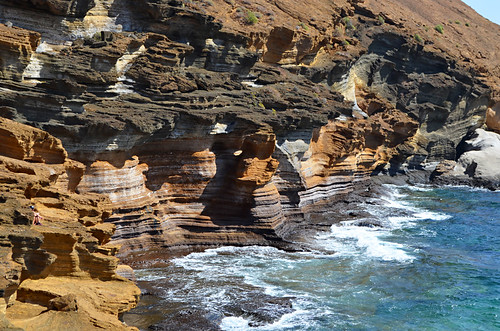 We head inland through the volcanic badlands, switching from path to path before we eventually turn back to the coast to reach the base of the Yellow Mountain (Montaña Amarilla). Instead of climbing it immediately we skirt around it as the path flirts with Costa del Silencio; the badlands momentarily replaced by bad housing – a slum of a building that reminds me more of inner city Manchester in the mid eighties than a place in the sun.

It’s only a brief blot on the landscape and one that serves to enhance the surprise element of the first sight of the wonderfully surreal mustard-coloured rock shelves where Montaña Amarilla meets the Atlantic. 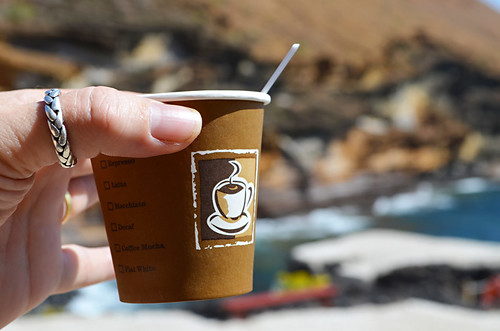 It’s one of our favourite coastal views on Tenerife and a discreet wooden café kiosk with eclectic seating compliments the scene. We order a couple of café Americanos, recline on a low bench and bask in what is basically a quite perfect coastal combination.

Afternoon at the Red Mountain
The sky is still blue and the sun still strong and warm. However, even though we’re only a few kilometres further east along the coast, the calmness has been replaced with a wind that likes to make its presence felt. It’s not a warm wind either and some people around us have their hoodies up, protecting their faces from a wind that snaps at exposed skin. 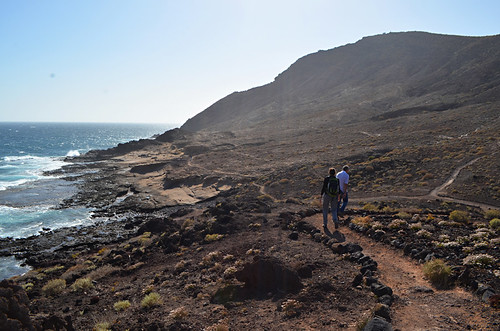 El Médano’s promenade fits its character, the faded wooden boardwalk taking its time to wind its way casually toward the southern end of town. Initially the town’s buildings provide some shelter and the wind is no more than a cool breeze that restyles the hair. But once free from their protection the wind roars, punching us malevolently around the ears as we cross moulded dunes. It’s a beguiling landscape where volcanic activity, the sea and the wind joined forces to indulge themselves, creating an eclectic world that holds an abstract beauty. I want to take time to carefully frame photographs of unusual shapes, but tiny wayward sand grains and cameras don’t get on.

The further we walk from the town, the stronger the wind becomes and we hunch forward into it, shouting at each other every now and again to try to communicate. It reminds us of walking in Fuerteventura almost exactly a year earlier where after thirty minutes of walking with a banshee screaming in our ears, it was easy to believe we were on the verge of madness. 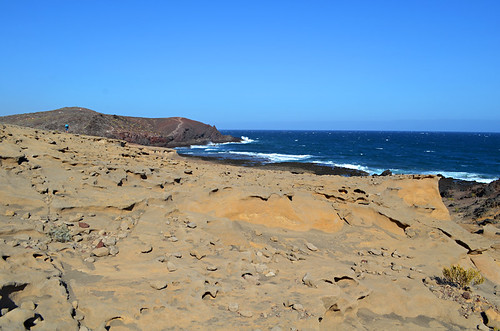 The closer we get to the Red Mountain (Montaña Roja), the more bizarre the terrain becomes; the rock formations and sand are an artist’s palette of colours. I’m slightly nervous of ascending the narrow path that runs up the side of the Red Mountain to reach the summit. The strength of this wind would be classed as yellow alert level  in most parts, here it is the welcome friend of the windsurfers and kiteboarders who decorate the seas around El Médano. The only good thing is that it’s a steady wind rather than a gusting one and subsequently poses no real danger as we make our way higher.

As we arrive at the peak the path curls to the mountain’s southern face… and a complete respite. It’s a calm sanctuary from the howling demons. We park ourselves on a convenient rock seat and wallow in the silence and a stunner of a view across the wide sands of Playa de la Tejita. 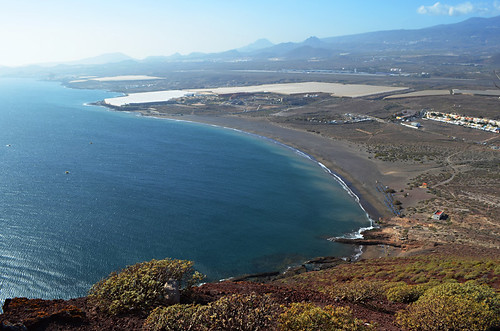 This is the reward for a bit of physical effort.

It’s quite a contrast from our morning on the edge of Costa del Silencio. I couldn’t say which was better. Both are special in their own unique way, but very different. As different as red and yellow.

The Montaña Roja route is included in our Captivating Coastline walking routes.

Walking through the old quarter in La Laguna

When the clouds roll in, the rain bounces off tiles designed for dry weather, and the normally inviting sea looks about as welcoming as a basin of washing up water, purpose-built beach resorts are dreary […]